Free will of a penny 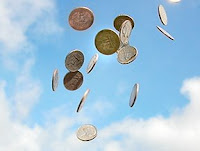 Imagine a copper penny that is exactly like an ordinary penny except that for this discussion it has consciousness. It knows it is a coin and it knows that you sometimes flip it. And it knows that no external force dictates whether it comes up heads or tails on any individual flip.
If the penny’s consciousness were like human consciousness, it would analyze the situation and conclude that it had free will. When it wanted to come up heads, and heads was the result, the penny would confirm its belief in its power to choose. When it came up tails instead, it would blame its own lack of commitment, or assume God had a hand in it.
The imaginary coin would believe that things don’t just ‘happen’ without causes. If nothing external controlled the results of the flips, a reasonable penny would assume that the control came from its own will, influenced perhaps by God’s will, assuming it were a religious penny.
The penny’s belief in its own role would be wrong, but the penny’s belief in God’s role would be right. Probability—the essence of God’s power—dictates that the penny must sometimes
come up tails even when the penny chooses to be heads.